THE SCATTERING is a collaborative release from the exemplary John Duncan and the little known sound artist Peter Fleur, who had a few minor league successes as L.O.S.D. with Radboud Mens. Here, the two artists collaborate on one long track and offer solo works to round out the album, always using data files and shortwave as the source material. Each of the tracks have been severely manipulated with loads of DSP effects, feedback accumulation, and resampling techniques to form plastic drones rippling with a dramatic psychic tension. As on Duncan's previous album Da Sich Die Machtgier..., the dominant sounds are the dissonant fillibration from densely packed samples that have all been timestretched towards oblivion. The collabortive piece builds dramatically through those cracked drones with a mechnized bass pulse ominously crawling below. Fleur's solo work splits itself between a Francisco Lopez-esque low end rumble and a cascade of digitized textures amassing into frigid wall of noise. The final track is a signature John Duncan piece, where he amplifies the unsettling nature of shortwave's liminal spaces between the active broadcast frequencies. Shortwave has long been a favorite medium for Duncan, not only for its aesthetic qualities but its allegorical properties of psychological unrest, hidden communications, information wars, etc. In this piece for The Scattering, Duncan contextualizes shortwave static as a parallel to somatic fluctuations, where the sounds breathe, ebb, and contract in response to a subconscious intellect. Very very nice.
-- Jim Haynes, Aquarius 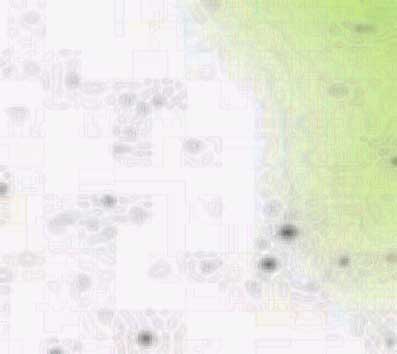 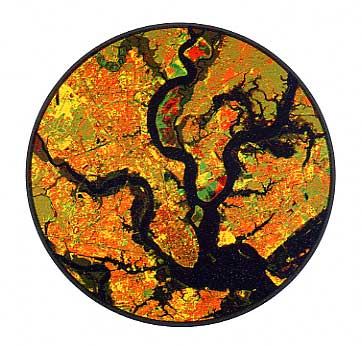 Asmus Tietchens proposed that he and I work together years ago -- many years ago. For a variety of reasons it didn't happen, and at this point I don't remember any of them. Finally we agreed to start: I asked him to send a recording of his voice and said I'd work with it, send him the result and continue from there -- figuring that he would add to my gestures, then I'd add to his, etc., until we were both satisfied. Asmus sent recordings of him reading two excerpts from texts by E. M. Cioran. Asmus had already processed his voice on both tracks.
After eighteen more months I finally started working on them, and a couple of weeks afterward sent him the results. Asmus liked what he heard, said he felt it was already finished -- and since he hadn't participated directly in the composing process, he couldn't accept credit for involvement in it. We still disagree on this, but it's useless to insist that someone accept what he doesn't feel he's earned. So although I remain convinced that Asmus deserves to be acknowledged as an equal, we've agreed that this project would be credited to me alone.
The next step was to ask Asmus to translate his texts to English. He felt unqualified to do this, and instead sent them typed in German with references to titles. English translations were easy to find, and now that the meaning of the excerpts is clarified for both of us I have to say that we disagree on this, too. Cioran's profound insights into the past and current collective human character, for many years a repeated source of inspiration to Asmus, are well worth becoming familiar with and I'm grateful to him for pointing them out. Cioran's fatalistic insistence on accepting futility as an inevitable part of human endeavors seems accurate -- up to a point. At the same time it fails to account for a growing number of my own experiences, and I think renders his work incomplete as a definitive summation of our existence.
The friction between Asmus' and my perspectives, the complete absence of any hostility between us, our acceptance of each other's differences and the depth of our mutual respect, have all been key elements in the process of making this audio work. Whether or not any of this has anything to do with the sound itself is left for you to decide.
-- John Duncan 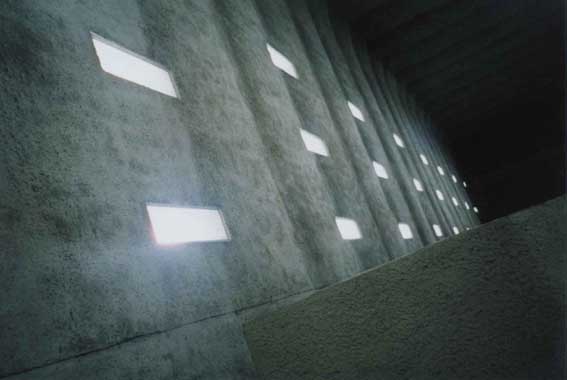 First of all, take any idea of wearing headphones out of the equation: the best - the ONLY - way to penetrate this work is to let its powerful frequency stream fill your listening space. Walk around the room, like you were a visitor of the installation; the distant sexual sighs - taken from Duncan's erotic videos - and the distorted and elongated Japanese phrases pronounced by John himself, almost akin to a mechanical sound, will also constitute a basic element in the timbral aspect of "Stun shelter". All this contributes to that body/mind function vacancy that seems to be one of the constant results of both Duncan and Von Hausswolff's long history of experiments.
-- Massimo Ricci, Touching Extremes 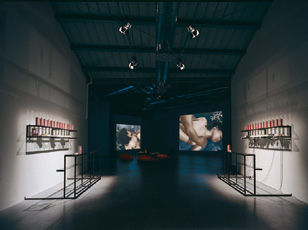 Sound projected from two separate audio systems mounted at the tops of galvanized steel towers, each 24 meters high, set up in front of the entrance to the Gothenburg city art museum. Each system is playing back parts of a piece composed for the installation using recordings from a 30-voice Italian children's choir as audio sources. The 4-channel sound is reflected off the museum's façade and the arched corridor immediately behind it, to create a multi-dimensional audio 'cloud' of modified voices that cluck their tongues, whisper, scream and howl to listeners standing on the terrace around and between the tower bases. The separate parts run 24 hours a day for 90 consecutive days, to constantly create new mixes without ever repeating.

The booklet's photos, taken by Giuliana Stefani, show the towers in question standing stark against a dreary sky. They're 24 meters high, with two speakers apiece pointed at the Gothenberg City Art Museum. During the city's 2nd Biennial in 2003, these speakers projected the processed voices obtained from the San Pietro Elementary School Choir. At the exhibit the sounds streamed continuously and were subjected to further processing by the museum's echoing corridor... The piece engenders surprise; so much of the sound has been tweaked into cloudy oblivion that it's a shock when full-throated screams leap out of the mix. At other points the voices coalesce into masses of clucking tongues or muttering whispers, only to veer once more into unrecognizable territory. It's possible to take this purely as a rich sonic experience, but for the booklet's dedication to children who have been abused by adults. This echoes one of Duncan's earliest pieces, "Happy Homes," in which he called a radio psychologist on the air and related the emotional numbing he'd experienced after watching kids being brutalized by their parents on the bus.
-- William Meyer, Signal To Noise no. 33, Spring 2004 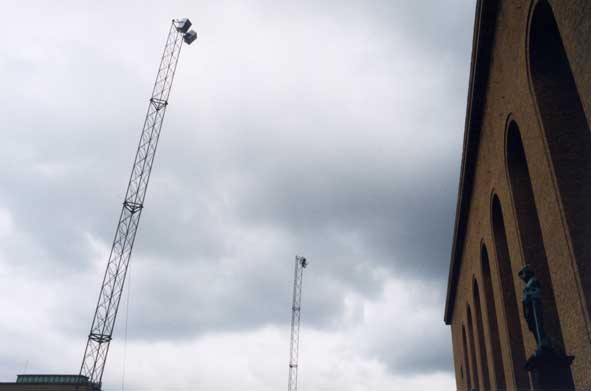 Densil Cabrera and I have yet to meet face-to-face. Our collaboration began in 1998, when Densil posted an offer to an audio chat list, open to anyone curious to hear and possibly work with tidal recordings he'd made. I responded that same day, intrigued to hear how tidal measurements would sound, more than with their value as scientific research. When his CDr arrived, I accepted the audio sources as 'pure' sound, and sent him a message offering to work with them as such. Densil agreed, and we kept in contact by email.

While working on this project, listening to the sources, checking Densil's website, I tried to deduce something about his character, why he'd chosen to record these sounds, why he'd chosen to share them openly with anyone. Aside from a few technical images from his audio research, these recordings were all the evidence there was available to form an impression of who I was working with. They seemed to imply a person as fascinated with the technical processes of making the recordings -- designing and building the recording equipment, making the tests, writing the software -- as he was in the results. Clearly he was seeking some sort of contact with someone outside of his immediate colleagues and friends, but he appeared not to be interested in knowing anything at all about who I was. It was a conscious decision on my part to accept these limits of his interest, to focus entirely on what the sources had to offer. At the same time, for me this added a human dimension -- isolation, separateness, the monotony of repetitive research, impermanence -- to the marine, atmospheric and geological basis of the audio sources.

The inherent linearity of the scientific data represented in these sounds has deliberately been destroyed, modified into material -- data, if you like -- that operates on several levels at once. According to the time scale represented in several of these recordings, it could be said that the entire process involved in producing this work, spanning five years, took a matter of seconds to complete. And in that time, I still know as little as ever about Densil.
-- John Duncan 2003

Though his prolific career is dotted with dozens of exceptional collaborations, John Duncan found himself in uncharted territory when constructing INFRASOUND-TIDAL from sources supplied by the Australian sound artist Densil Cabrera. The process of testing the self has been a central theme in Duncan's earlier works. Typically, he manifested it by pitting equally strong forces against each other within a crucible of intense psychological, aesthetic and/or conceptual pressures. In SCARE, he set up a confrontation of sexual and violence taboos by firing blanks at unsuspecting participants; in HOME: UNSPEAKABLE he pushed his collaborator Bernhard Günter's already quiet aesthetics into a black hole of gaping silences. Here, however, as Duncan states in his sleevenotes, Cabrera "appeared not to be interested in knowing anything at all about who I was". Rather, Cabrera was more interested in articulating and amplifying tidal, seismic and barometric data into a rudimentary collection of sounds. Duncan interpreted his scientific approach to sound as a removal of the self, and used that as an allegorical frame to determine how he should compose the work. On INFRASOUND-TIDAL, then, Duncan adopts a cold, detached demeanour.
The Album's opening sustained tones subtly expand into interlacing fragments of purified sound. These drones flicker softly like controlled feedback or sinewave modulations, but they are more compelling than the contemporary no-input mixing work of Toshimaru Nakamura, say. It may be difficult to discern what these drones have in common with the source material, but Duncan's goal is to aptly parallel the rigours and monotony of scientific research in a data form which requires concentrated listening to percieve its minutiae. In the process, he implodes perceptions of time. The arbitrary 12 minute timeframe of his opening section could just as well have lasted 12 seconds or 1200 years.
Thick grey drones and distant white noise mimic the scientific process as an isolated practice, occasionally punctuated by scribbles of indeterminate activity that might relate to some wondrous discovery. INFRASOUND-TIDAL is a compelling if hermitic work that reflects on science's psychological impulses both as an aesthetic and as an agenda.
--Jim Haynes, The Wire July 2003 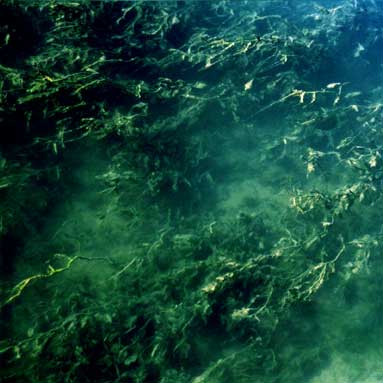